A dear friend has offered to help me pay for the anesthesia that I'll need (which my insurance doesn't cover), in the near future, for a molar and wisdom tooth extraction. I decided to make her a table runner with matching napkins as a "thank you".

This project took me longer than I liked, but was nursing a very sick kitty since the beginning of December. Once kitty felt much better, which took a load off my mind, I was finally able to get the warp made and threaded. 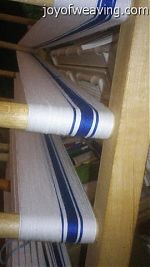 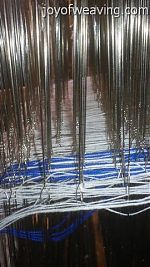 One thing I like to do with projects like this that have different yarns is to run the yarn from the inactive shuttle up the sides like a floating selvage. I place the inactive shuttle behind the beater. I also keep track of the length of my piece by using a contrasting piece of yarn cut to the length of my project and wrapping it around a warp thread occasionally to anchor it to the web. No rulers, no pins, no fuss, no muss.

I've not been super diligent about the tension on the thread of the inactive shuttle and that's the reason the selvages are so wonky and I think a crocheted lace border will be just the ticket to cover that up.

Nearly done with the runner. Here's the back side of the web. 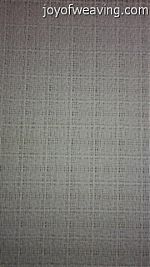 I was thinking of doing the napkins all in blue so that there's white stars throughout, but I finally settled on mimmicking the table runner.

I'll update this post as soon as they are hemmed and wet finished.