Being the fiberholic that I am, I can't help but notice textiles used all around me. This includes the fabric choices from costume designers in theatrical productions of all types to everyday clothing and, especially, the vintage clothing I see at thrift stores.

I was watching "Shakespeare in Love" on Netflix recently and although I've watched it many times, I see something different every time I watch. The last time I watched, I noticed the cloth used in the wimple worn by Imelda Staunton in the role of "Nurse". I had to get a screenshot 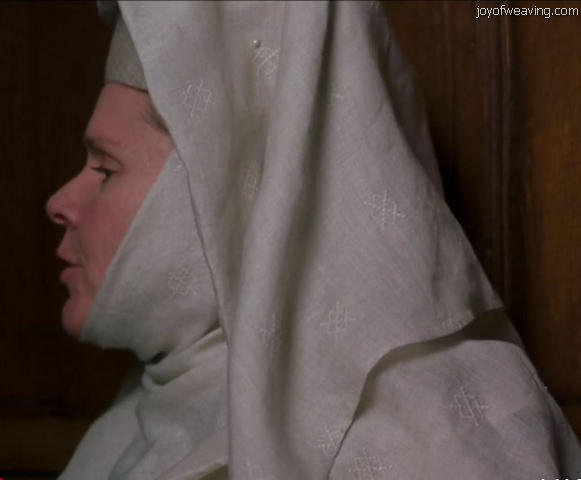 It's probably woven in linen. I don't have linen (and to be honest, it's not my favorite fiber to work with) so I'll  weave this in a natural colored wool that I found at a thrift store earlier this year. Here's the drawdown of the draft that I came up with. 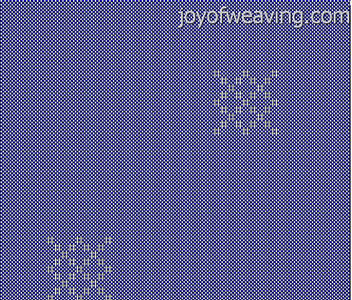 I weighted the cone to figure out approximately much cloth I could get out of it if I wove it the full width of my loom. Once I had my figures, I got to work on the warp. The cone had spots on the outer layer where the yarn was broken so I had to be extremely careful when making the warp. Rather than using my DIY Horizontal Warping Mill, I used my small Schacht warping board. I felt like a film editor, cutting past unwanted bits to make it all fit together smoothly. Eventually I got into the better part of the cone and warping went much faster. I also noticed that the yarn was a bit sticky on the board. Having worked with sticky yarn in the past, I am bracing myself for a fight during beaming and weaving.  If it doesn't work out, that's OK too. The yarn didn't cost much and the only thing I'm out is my time.